„will be announced at the Retreat“
H.H. Sacinandana Swami

„will be announced at the Retreat“
H.G. Badahari Prabhu 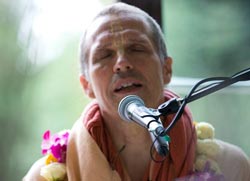 Sacinandana Swami has been a monk of the bhakti tradition for over 45 years. He is known for his contributions to the practice of meditation and contemplation of modern bhakti practitioners. Sacinandana Swami has published several books and CDs, and offers a large number of retreats, seminars and workshops. Thousands of enthusiastic fellow singers and dancers attend his worldwide kirtan concerts.

Sacinandana Swami founded the Yoga Is Music Project in 2009 and teaches regularly at the Institute for Higher Education in Vrindavan (VIHE), India. He is a visiting lecturer at Bhaktivedanta College in Belgium and the spiritual mentor of the Vedas Academy, which is active in eight countries. He visits the holy pilgrimage sites of India every year and finds inspiration for his personal life there. His pilgrimages have taken him all over India, in particular he appreciates the sacred land of Vrindavan, the birthplace of Sri Krishna.

Known for his inspiring and soulful chants, Bada Haridas has studied and performed devotional music and Kirtan since 1975. Bada Haridas artistically weaves together his many influences, creating unique music for his kirtan chants. As a sincere practitioner of bhakti yoga, there is a depth to his music and a quality of his singing that is both inspiring and healing.

Living as a monk in the Los Angeles ashram, accepting vows of austerity and sense control, his musician life and its trappings quickly became a past life, devoid of maya’s glitter. In its place, Kirtan, the devotional singing of Krishna’s names, became his music and his personal connection to the divine. Learning the Sanskrit and Bengali songs and prayers, studying the ancient melodies and ragas, and teaching himself eastern instruments to accompany kirtan, Bada Haridas became a sought after kirtan leader and teacher.